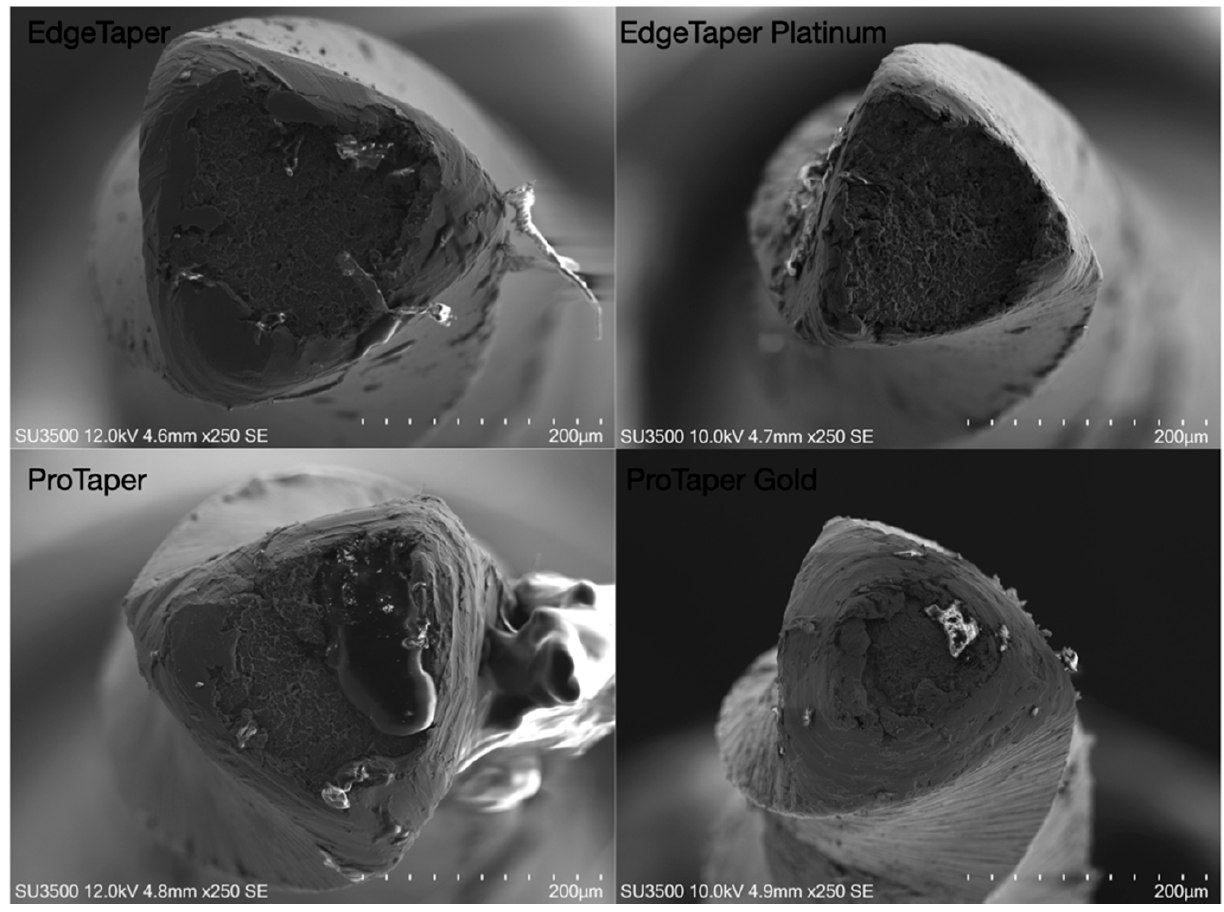 Protaper Universal (PTU), Protaper Gold (PTG) (Maillefer, Ballaigues, CH), EdgeTaper (ET), and EdgeTaper Platinum (ETP) (Albuquerque, NM, USA) were tested for both torsional and ﬂexural resistance. The aim of the present study was to evaluate the inﬂuence of proprietary heat treatment on the metallurgical properties of the aforementioned instruments. Four groups of 30 diﬀerent instruments (size 20.07) were tested, then divided into two subgroups of 15 instruments—one for the cyclic fatigue test in a curved canal (90◦—2 mm radius) at 300 rpm and 2.5 Ncm. The time to fracture (TtF) and fragment length (FL) were recorded. The other subgroup was subjected to the torsional test (300 rpm, 5.5 Ncm). The torque to fracture and TtF were recorded. All the instruments underwent a SEM analysis. The heat-treated instruments showed a signiﬁcantly higher fatigue resistance than the non-heat-treated instruments (p < 0.05). No signiﬁcant diﬀerences were found in the torsional resistance between the ET and PTU, and the ETP and PTG. However, when comparing all the groups, the heat-treated instruments showed less torsional resistance. The improvement from heat treatment was mainly found in the cyclic fatigue resistance.

The intracanal fracture of nickel–titanium (NiTi) rotary ﬁles is still one of the main concerns during root canal therapy. It has been demonstrated by many authors that rotary NiTi ﬁles essentially fail for two main reasons: ﬂexural (cyclic) fatigue and torsional failure [1,2]. The cyclic fatigue failure of the ﬁle occurs because of the repeated compressive and tensile stresses that accumulate at the ﬁle’s point of maximum-stress, which is located at the maximum curvature point inside the root canal’s anatomy [3]. Torsional failure occurs when the tip (or some part of the ﬁle) binds (or is blocked inside) the root canal, while the motor continues to rotate until the torsional limits are overcome and a fracture occurs [4]. The mechanical resistance of NiTi rotary ﬁles has been tested in two diﬀerent ways: cyclic fatigue tests and the torsional test. When investigating cyclic fatigue, instruments are usually rotated inside an artiﬁcial curved canal until a fracture occurs at the recommended rotation speed. When investigating the torsional resistance, based on the ADA testing recommendations for stainless steel manual ﬁles, the tip is usually locked at 2 mm and its rotation speed is 2 rpm. Unfortunately, there is no ADA standard that describes how to test nickel–titanium rotary ﬁles; therefore, studies and their results may diﬀer signiﬁcantly due to the diﬀerent testing devices and diﬀerent methodologies [5–7]. Over the past several years, improvements in design, alloys and manufacturing processes have been proposed to increase the mechanical resistance of NiTi rotary ﬁles. Several proprietary heat treatment applications have been developed. Studies have shown that thermal treatments (for ﬁles with the same geometry and design) enhance the cyclic fatigue lifespan while, at the same time, reducing the torsional resistance of a ﬁle [8–10]. Some studies have also compared heat-treated ﬁles and non-heat-treated ﬁles with diﬀerent cross-sectional designs in cyclic fatigue tests, which demonstrate that heat treatment may not be the most inﬂuential parameter for ﬂexural resistance [11]. Therefore, many other factors can inﬂuence mechanical resistance. Data have shown that diﬀerent cross-sectional designs, tip and taper dimensions, pitch lengths, and operative motions could aﬀect the resistance to both the ﬂexural and torsional stresses [12–14]. Additional mass increases the torsional resistance and decreases the fatigue resistance [15]. However, very few studies have compared instruments of the same design (and diﬀerent heat treatments) for both torsional and fatigue resistance [16,17]. Therefore, in the present study, four commercial instruments, with a similar design and tip and taper dimensions, were tested and compared, in order to assess if and how diﬀerent heat treatments may aﬀect both the torsional and ﬂexural resistance.

In conclusion, for both manufacturers, heat treatment revealed a signiﬁcant impact on increasing the resistance to cyclic fatigue. In contrast, the torsional resistance was not improved by the heat treatments. Moreover, torsional failure may happen rapidly if the ﬁles become taper locked, since the recorded torque values at the point of failure were signiﬁcantly lower than the operative torque values recommended by the manufacturers.